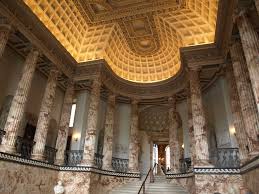 Programme of songs and duets by Mendelssohn, Brahms, Mahler, Britten and others. Arias and duets from their favourite operas.

Sarah-Jane Lewis studied at the Royal College of Music and then at the Royal Academy where she gained her MA. She completed the course at the National Opera Studio in 2014. The winner of many important competitions Sarah-Jane took the second prize at the 2014 Kathleen Ferrier Awards where Hilary Finch, writing in The Times, described her “warm, capacious soprano, powerfully contained through its wide range, which left this listener longing for more.”

Gareth Brynmor John took the first prize at the Kathleen Ferrier Awards in 2013, where his voice “held the audience gripped with its clarity and warmth evenly spread through its range” – Geoff Brown, The Times. Gareth studied Geography at St John’s College, Cambridge before studying at the Royal Academy of Music. He is currently now studying at the National Opera Studio. He is equally at home in opera, oratorio and as a recitalist. He appeared at Bury Court Opera as Sharpless and has given recitals including festivals in Buxton, Oxford and Leeds, and many more.

Simon Lepper is a familiar face both at Holkham and at the North Norfolk Music Festival and works with an impressive list of established singers as well as those from the younger generation. He performed with Mark Padmore at the 2015 Schubertiade in Schwarzenberg, one of the world’s most prestigious chamber music festivals. He is one of the two pianists at the bi-annual BBC Cardiff Singer of the World Competition and is a professor of song accompaniment at the Royal College of Music.

Tickets: £25, includes a glass of wine in the Saloon during the interval and an opportunity to view some of the other state rooms in the Hall.