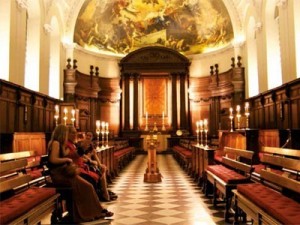 The Chapel Choir of the Royal Hospital Chelsea gives its annual November concert in the sumptuous surrounds of Christopher Wren’s Chapel.

The theme of Remembrance is highly appropriate to the Royal Hospital Chelsea, and to this time of year; Gabriel Fauré‘s enduringly popular setting of the Requiem texts is undoubtedly one of his masterpieces, and we hear it alongside music by English composers that dwell on the subject of sacrifice, repose and communion.

The evening concludes with Ralph Vaughan Williams’s Five Mystical Songs for solo baritone and choir; Gareth John won First Prize at the Kathleen Ferrier Awards in 2013 and is emerging as one of the leading baritones of his generation.