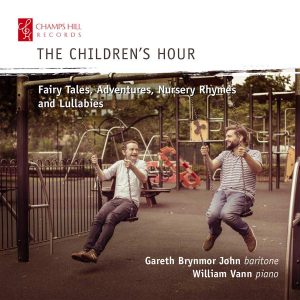 Acclaimed baritone Gareth Brynmor John and prize-winning pianist William Vann celebrate the wonder of childhood with a new recording of Fairy Tales, Adventures, Nursery Rhymes and Lullabies. Dedicated to their respective children, the recording takes its name from Charles Ives’s charming setting of Henry Longfellow’s poem, The Children’s Hour. Gareth Brynmor John comments: ‘Each of us has two young children, and the patter (or, perhaps, stomping) of tiny feet is now part of the soundscape (cacophony) of our everyday lives. Our programme weaves a tapestry of childhood experience: some tales stray towards the dark and nightmarish, even going as far as death, many are deeply comic, and others are charming or immensely profound. All of them, though, contemplate the wonder of childhood that continues to nourish us as adults, either through direct experience or via our memories.’ This release marks William Vann’s second disc for Champs Hill, and he is delighted to return to a label of which he is very fond.

“A beautifully thought out and finely crafted recital”  ***** Robert Hugill

This recording is of songs, solo piano works and a piano duo by John Sykes. The songs are largely settings from William Blake’s poems of Innocence and Experience, but there are also settings of poems by Sykes’s friend and contemporary, Randall Swingler.
John Sykes (1909-1962) was a pianist, composer and schoolteacher. He gained his FRCO as a schoolboy and became Organ Scholar at Balliol College Oxford. Later, he studied with both Ralph Vaughan Williams and Gordon Jacob. Albion Records is the recording arm of The Ralph Vaughan Williams Society, so it is Sykes’s association as a pupil that inspires this release.
Rowan Pierce (soprano), William Vann (piano), Gareth Brynmor John (baritone), Iain Farrington (piano) 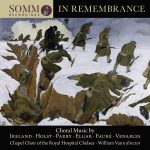 In the centenary anniversary year of the end of the First World War and on the eve of the 80th anniversary of the beginning of the Second World War, SOMM Recordings pays tribute to those who fought and fell in battle with In Remembrance. A moving compendium of music spanning 130 years, it features the Chapel Choir of the Royal Hospital Chelsea, the Choir of Chelsea Pensioners, Staff and Volunteers, sopranos Katy Hill and Leah Jackson, baritone Gareth John and organists James Orford and Hugh Rowlands under the direction of William Vann.

‘The performances of baritone Gareth Brynmor John in the Mahler and mezzo-soprano Katie Bray in the Zemlinsky are especially warm and intimate in this setting…these performances are so ingratiating, this hybrid SACD is recommended for all listeners.’